Vassa's Interesting Narrative was focused on slavery, his own experiences when he was enslaved, his observations of slavery in different contexts in the Caribbean, his comparisons of both what he endured and what he witnessed with his memories of slavery in his Igbo homeland and the Ottoman port of Smyrna. As might be expected, Vassa was opposed to slavery at the time that he wrote h is autobiography, but what is perhaps not to be expected are his reflections on what he saw and felt and his extensive commentary on the subject.

I remember a man was brought before my father, and the other judges, for kidnapping a boy; and, although he was the son of a chief or senator, he was condemned to make recompense by a man or woman slave. Adultery, however, was sometimes punished with slavery or death; a punishment which I believe is inflicted on it throughout most of the nations of Africa: so sacred among them is the honour of the marriage bed, and so jealous are they of the fidelity
of their wives. Of this I recollect an instance.-A woman was convicted before the judges of adultery, and delivered over, as the custom was, to her husband to be punished. Accordingly he determined to put her to death: but it being found, just before her execution, that she had an infant at her breast; and no woman being prevailed on to perform the part of a nurse, she was spared on account of the child.

What Vassa does not recount is that a woman in such circumstances, as would also happen to the mother of twins, would most likely be confined to the sanctity of a religious shrine, formally considered now to enslaved to the diety of the shrine and openly shunned by the rest of society. These individuals, known as osu, were in effect slaves without a human master and therefore prevented from social interaction, although they could not be sold.

Vassa thought that the slave trade harmed both Africans and Europeans:

Such a tendency has the slave-trade to debauch men’s minds, and harden them to every feeling of humanity!…it is the fatality of this mistaken avarice, that it corrupts the milk of human kindness, and turns it into gall…Surely this traffic cannot be good, which spreads like a pestilence, and taints what it touches! Which violates that first natural right of mankind, equality and independency, and gives one man a dominion over his fellows which God could never intend! For it raises the owner to a state as far above man as it depresses the slave below it. (Equiano 111)

Vassa'sexamination of the slave trade’s effect on African slaves led him to conclude that:

When you make men slaves, you deprive them of half their virtue, you set them, in your own conduct, an example of fraud, rapine, and cruelty, and compel them to live with you in a state of war; and yet you complain that they are not honest and faithful! You stupify them with stripes, and then think it necessary to keep them in a state of ignorance; and yet you assert that they are incapable of learning; that their minds are such a barren soil. (Equiano 111-112)

For Vassa, the difference between West African slavery and trans-Atlantic slavery had an economic dimension. Some key passages in Vassa’s Interesting Narrative shed light on the ways in which slaves were procured for purposes of indigenous use. In commenting on battles, he confirmed that:

The spoils of war were divided accordingly to the merit of the warriors. Those prisoners which were not sold or redeemed we kept as slaves: but how different was their condition from that of the slaves in the West Indies! With us they do no more work than other members of our community, even their master; their food, clothing and lodging were nearly the same as theirs (except that they were not permitted to eat with those who were freeborn), and there was scarce any other difference between them than a superior degree of importance which the head of the family possesses in our state, and that authority which, as such, he exercises over his household. Some of these slaves have even slaves under them as their own property and for their own use. (Equiano 1789, 9)

The number of slaves one could obtain was directly associated with “merit” and signified prestige. Further, slaves are shown to be "outsiders" or "alien" to the societies in which they were enslaved.

Opinion on Economic value of the Slave Trade
Vassa proposed a solution to the ending of slavery that would fill the economic void and provide an alternative source of revenue that would arise as a result of the abolition of the slave trade that reflected the views of his contemporary, Adam Smith:

As the inhuman traffic of slavery is now taken into the consideration of the British legislature, I doubt not, if a system of commerce was established in Africa, the demand for manufactures would most rapidly augment, as the native inhabitants would insensibly adopt the British fashions, manners, customs, &c. In proportion to the civilization, so will be the consumption of British manufactures…The wear and tear of a continent, nearly twice as large as Europe, and rich in vegetable and mineral productions, is much easier conceived than calculated… It is trading upon safe grounds. A commercial intercourse with Africa opens an inexhaustible source of wealth to the manufacturing interests of Great Britain…[therefore]… The abolition of slavery, so diabolical, will give a most rapid extension of manufactures…The manufacturers of this country must and will, in the nature and reason of things, have a full and constant employ, by supplying the African markets. (Equiano 233- 234) 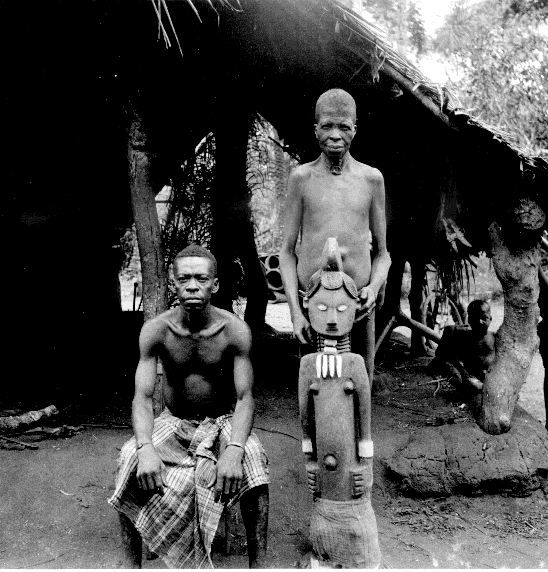 Igbo priest (seated) with his osu (“juju slave”), Orsu, West Isuama Igbo, n.d. The Osu Caste System in Igboland discourages social interaction and marriage with a group of people, referred to as Osu (outcasts) who are seen as inferior to the Nwadiala (free-borns). Photo by G.I. Jones, Photographic Archive, Southern Illinois University.