There are many theories about where Gustavus Vassa was born. He said he came from Essaka in Igboland. The name he was given after he was born, Olaudah, is an Igbo name, as his second name, Equiano, which was certainly not a surname but a continuation of his name Olaudah. It was suggested in the early 1960s by novelist Chinua Achebe that Essaka might be identified with Issieke, a theory that Catherine Ancholonu has advocated most forcefully. Issieke is located in central Igboland, to the southeast of Onitsha. G.I. Jones postulated that Vassa came from that part of Igboland to the west of the Niger River, primarily because of Vassa's references to the Kingdom of Benin, which is the west of the Niger and held sway over portions of Igbo country as far as the Niger River in the eighteenth century. Still another theory identifies Esseke with Usaka, which is located in Abia State. Finally, Vincent Carretta has argued that Vassa might have been born in South Carolina, and not in Igboland at all. Carretta bases his argument on Vassa's baptismal record from 1759 that states that he was born in Carolina. However, there is no reason to believe the baptismal record since it was dictated by relatives of his master, remembering that Vassa was a slave at the time and was definitely not responsible for the misinformation in the records of St. Margaret's Church in Westminster. Carretta also claims that a document from the records of the Arctic Expedition of 1774, which also gives a Carolina birth, is to be trusted. This is not clear, however, since the name in the Muster that Carretta identifies as Vassa is Weston, a confusion that the person recording details for each sailor is unlikely to have made, although the first name Gustavus is the same. Perhaps is the first name Gustavus that has led confusion, since that was not a typical English name at the time. Nonetheless, the similarity between Weston and Vassa in pronunciation could not have been close. On the Arctic Expedition, moreover, Vassa was not a regular seaman but instead was the assistant to lead scientist Dr. Charles Irving, and might not have been entered in the Musters. He was a freeman and as such carried with him two documents to prove his free status - his emancipation paper and his baptismal record. He was hardly in a position to contradict what was in his legal papers, which stated a Carolina birth and identified him by name. Vassa most certainly would have used the documents to legitimize his status as a free person, despite any errors contained therein.

Why would his godparents, the Guerins, incorrectly attest that Vassa came from "Carolina," presumably South Carolina, when they would most certainly have known that their cousin was buying tobacco in Virginia and had not been to South Carolina? This curious misinformation has not been explained, but there is no doubt that Vassa is correct about being in Virginia, not South Carolina, when Pascal purchased him from a tobacco planter by name of Campbell, who apparently lived somewhere near the Potomac River close to where the city of Washington would later be built. According to Vassa, he stayed in Barbados for only a few weeks before being taken to Virginia:

I stayed in this island [Barbados] for a few days; I believe it could not be above a fortnight; when I and some few more slaves, that were not saleable amongst the rest, from very much fretting, were shipped off in a sloop for North America. On the passage we were better treated than when we were coming from Africa, and we had plenty of rice and fat pork. We were landed up a river a good way from the sea, about Virginia county, where we saw few or none of our native Africans, and not one soul who could talk to me.I was a few weeks weeding grass, and gathering stones in a plantation; and at last all my companions were distributed different ways, and only myself was left. I was now exceedingly miserable, and thought myself worse off than any of the rest of my companions; for they could talk to each other, but I had no person to speak to that I could understand. In this state I was constantly grieving and pining, and wishing for death rather than any thing else. While I was in this plantation the gentleman, to whom I suppose the estate belonged, being unwell, I was one day sent for to his dwelling house to fan him.... I had been some time in this miserable, forlorn, and much dejected state, without having any one to talk to, which made my life a burden, when the kind and unknown hand of the Creator (who in very deed leads the blind in a way they know not) now began to appear, to my comfort; for one day the captain of a merchant ship, called the Industrious Bee, came on some business to my master’s house. This gentleman, whose name was Michael Henry Pascal, was a lieutenant in the royal navy, but now commanded this trading ship, which was somewhere in the confines of the county many miles off. While he was at my master’s house it happened that he saw me, and liked me so well that he made a purchase of me. I think I have often heard him say he gave thirty or forty pounds sterling for me; but I do not now remember which. However, he meant me for a present to some of his friends in England: and I was sent accordingly from the house of my then master, one Mr. Campbell, to the place where the ship lay; I was conducted on horseback by an elderly black man, (a mode of travelling which appeared very odd to me). When I arrived I was carried on board a fine large ship, loaded with tobacco, &c. and just ready to sail for England.

Pascal's ship, the Industrious Bee, then sailed for England with its load of tobacco, which was a crop grown in Virginia, not South Carolina, The final confirmation that Vassa's account is to be believed over the baptismal entry at St. Margaret's Church relates to the highly improbable possibility that a young, able-bodied boy of age 12 could have been born in South Carolina but somehow ended up in Virginia, since there was virtually no trade in slaves between the two North American colonies while there was an active trade to both colonies from Barbados. Moreover, if Vassa had been born in North America, he would have known others who spoke Igbo, his parents if he had been born there, since there was a small Igbo population in South Carolina at the time, amounting to perhaps 1,000 individuals who had arrived there in the two decades or so before his birth in c. 1742, while the population of Igbo in Virginia was considerably larger, perhaps as many as 36,000 arriving directly from Africa between 1720 and 1753, representing almost 43 percent of direct arrivals from Africa, in addition to several thousand more coming via Barbados. By contrast, South Carolina received just over 8,000 people directly from the Bight of Biafra, representing about 19 percent of its total immigration from Africa in this period. To the extent that an Igbo community survived, it was more likely stronger in Virginia than in South Carolina. The demographics of the enforced migration do not support a connection between Vassa and South Carolina but are consistent with his own account of a voyage from the Bight of Biafra via Barbados to Virginia. Moreover, Vassa's statement that he did not know anyone in Virginia who spoke Igbo seems strange if he had been born there, since there was a preponderance of people from Igboland in the Chesapeake. Rather, he says he was only in Virginia a couple of months, hardly long enough to get to know anyone other than the Africans on Campbell's plantation, which could only mean that there were none there. By contrast, some 4,000 captives arrived in Barbados from the Bight of Biafra in 1753, far more than were retained on the island, some of whom were clearly sold to other destinations, including Vassa.

For estimates of the number of individuals who could have known Igbo in South Carolina and Virginia in the 1730s through 1751, see www.slavevoyages.org. 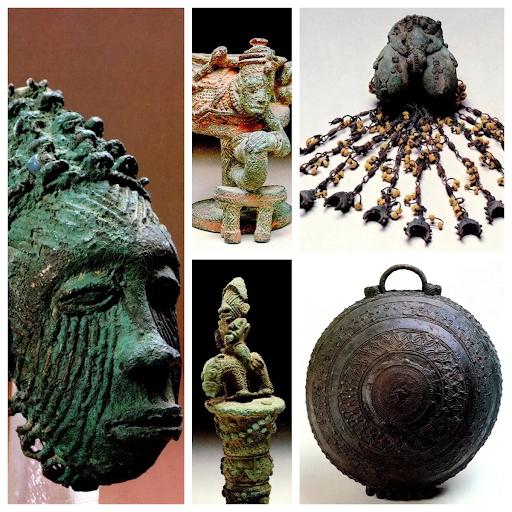 A series of Igbo-Ukwu bronze sculptures from the Nri region. The Igbo people were known for their bronze masks, Mbari houses, and mud sculptures. Art & Life in Africa Collection, The University of Iowa Museum.