Gustavus Vassa was enslaved as a boy in approximately 1753, according to his own account. He describes the moment when he and his sister were seized by kidnappers and forced into sacks and carried off while their parents were in the field farming. In his description of the market where he had visited on occasions with his mother, he referred to merchants from the southwest of his village who almost certainly Aro, an Igbo clan that had established its monopoly over much of the long-distance trade in the interior of the Bight of Biafra. Their hometown was Aro Chukwu, located on the escarpment overlooking the Cross River, on the eastern frontier of Igboland. By the middle of the eighteenth century, they had established satellite villages throughout much of the interior as far as the Niger River to the west and in parts of neighboring Ibibioland to the  north of Aro Chukwu. The fact that Vassa remembered that the merchants he had seen came from the southwest of his village is fully in accordance with the range of settlements that existed by 1750. Aro merchants through their network, control of inter-village trade, and domination of large monthly markets at Bende and Uburu monopolized the slave trade and the distribution of imported goods brought by European, largely British, ships to the Bight of Biafra, especially through the main port at Bonny.

Vassa's account of the kidnapping of himself and his sister explains the commercial system and also accurately indicates that the Aro did not only conduct trade but were also involved in the actual enslavement of kidnapped victims as well:

We have also markets, at which I have been frequently with my mother. These are sometimes visited by stout mahogany-coloured men from the south west of us: we call them Oye-Eboe, which term signifies red men living at a distance. They generally bring us fire-arms, gunpowder, hats, beads, and dried fish. The last we esteemed a great rarity, as our waters were only brooks and springs. These articles they barter with us for odoriferous woods and earth, and our salt of wood ashes. They always carry slaves through our land; but the strictest account is exacted of their manner of procuring them before they are suffered to pass. Sometimes indeed we sold slaves to them, but they were only prisoners of war, or such among us as had an been convicted of kidnapping, or adultery, and some other crimes, which we esteemed heinous. This practice of kidnapping induces me to think, that, notwithstanding all our strictness, their principal business among us was to trepan our people. I remember too they carried great sacks along with them, which not long after I had opportunity of fatally seeing applied to that infamous purpose.

In his own case and that of his sister, Vassa notes that

One day, when all our people were gone out to their works as usual, and only I and my dear sister were left to mind the house, two men and a woman got over our walls, and in a moment seized us both, and, without giving us time to cry out, or make resistance, they stopped our mouths, and ran off with us into the nearest wood. Here they tied our hands, and continued to carry us as far as they could, till night came on, when we reached a small house, where the robbers halted for refreshment, and spent the night. We were then unbound, but were unable to take any food; and, being quite overpowered by fatigue and grief, our only relief was some sleep, which allayed our misfortune for a short time. The next morning we left the house, and continued travelling all the day. For a long time we had kept the woods, but at last we came into a road which I believed I knew. I had now some hopes of being delivered; for we had advanced but a little way before I discovered some people at a distance, on which I began to cry out for their assistance: but my cries had no other effect than to make them tie me faster and stop my mouth, and then they put me into a large sack. They also stopped my sister’s mouth, and tied her hands; and in this manner we proceeded till we were out of the sight of these people. When we went to rest the following night they offered us some victuals; but we refused it; and the only comfort we had was in being in one another’s arms all that night, and bathing each other with our tears. But alas! we were soon deprived of even the small comfort of weeping together. The next day proved a day of greater sorrow than I had yet experienced; for my sister and I were then separated, while we lay clasped in each other’s arms. It was in vain that we besought them not to part us; she was torn from me, and immediately carried away, while I was left in a state of distraction not to be described. I cried and grieved continually; and for several days I did not eat any thing but what they forced into my mouth. At length, after many days travelling, during which I had often changed masters, I got into the hands of a chieftain, in a very pleasant country. This man had two wives and some children, and they all used me extremely well, and did all they could to comfort me; particularly the first wife, who was something like my mother. Although I was a great many days journey from my father’s house, yet these people spoke exactly the same language with us. This first master of mine, as I may call him, was a smith, and my principal employment was working his bellows, which were the same kind as I had seen in my vicinity.... I was there I suppose about a month, and they at last used to trust me some little distance from the house. This liberty I used in embracing every opportunity to inquire the way to my own home: and I also sometimes, for the same purpose, went with the maidens, in the cool of the evenings, to bring pitchers of water from the springs for the use of the house. I had also remarked where the sun rose in the morning, and set in the evening, as I had travelled along; and I had observed that my father’s house was towards the rising of the sun.

Vassa also remembered that there were skirmishes between villages that also resulted in enslavement, and again, he postulates that the merchants whom he identified as Oye Eboe, who here are identified as Aro, were involved. Battles usually took place in an open space, which Vassa refers to as a "common":

This common is often the theatre of war; and therefore when our people go out to till their land, they not only go in a body, but generally take their arms with them for fear of a surprise; and when they apprehend an invasion they guard the avenues to their dwellings, by driving sticks into the ground, which are so sharp at one end as to pierce the foot, and are generally dipt in poison. From what I can recollect of these battles, they appear to have been irruptions of one little state or district on the other, to obtain prisoners or booty. Perhaps they were incited to this by those traders who brought the European goods I mentioned amongst us. Such a mode of obtaining slaves in Africa is common; and I believe more are procured this way, and by kidnapping, than any other.

Here as elsewhere Vassa cites Philadelphia Quaker Anthony Benezet as a source for confirmation that similar practices were common elsewhere in Africa. One of the astonishing dimensions of Vassa's autobiography is his preoccupation with authentication. He cites the published sources that he drew upon, clearly draws on diaries that he kept, and includes documents that are relevant to major points in his life. Where he draws on his memory, he sometimes refers to his discussions with other Igbo in London. Nonetheless, as with any references to childhood experiences, he consciously and sometimes not so consciously interprets what he remembers. The same can be said about his understanding of slavery in Igboland. In reference to one battle that he witnessed from the safety of a tree, he noted that after his village had prevailed in the fight that:

The spoils were divided according to the merit of the warriors. Those prisoners which were not sold or redeemed we kept as slaves: but how different was their condition from that of the slaves in the West Indies! With us they do no more work than other members of the community, even their masters; their food, clothing and lodging were nearly the same as theirs, (except that they were not permitted to eat with those who were free-born); and there was scarce any other difference between them, than a superior degree of importance which the head of a family possesses in our state, and that authority which, as such, he exercises over every part of his household. Some of these slaves have even slaves under them as their own property, and for their own use.

Indeed, Vassa states that his father had "many slaves." In his opinion, slaves were not usually maltreated; as he stated: "I must acknowledge, in honour of those sable destroyers of human rights, that I never met with any ill treatment, or saw any offered to their slaves, except tying them, when necessary, to keep them from running away." 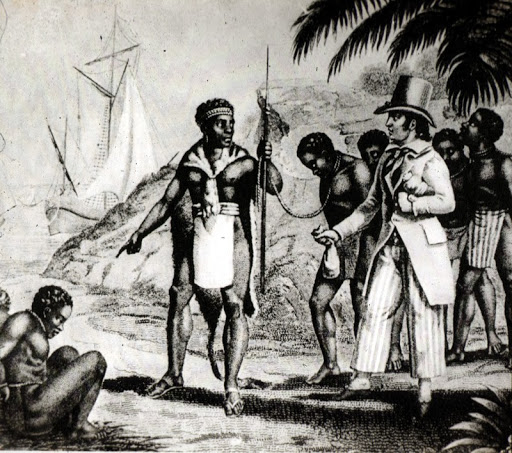 An African merchant selling slaves to a European in Isabelle Aguet, A Pictorial History of the Slave Trade (Geneva: Editions Minerva, 1971), 18.