The British abolition movement was fundamentally a racialized phenomenon. The leadership that came to oppose the trans-Atlantic slave trade was composed almost entirely of white Britons, and the popular base for support for abolition was the same. There were reasons for this racialization. All political power in Britain at the end of the eighteenth century and continuing through abolition in 1807 and well beyond was in the hands of elite white males who generally owned property, sometimes considerable amounts of wealth. To the extent that women had a voice, it was through their husbands and kin. All the members of Parliament, whether pro-abolition or pro-slavery, were white, as was King George III and his wife Queen Charlotte, despite the fact that some of her distant ancesters in the Portuguese line possibly had African ancestry.

The Clapham sect, named for those abolitionists who were associated with the Anglican church of Clapham in south London under rector John Venn, were wealthy reformers, all white, and included William Wilberforce, Henry Thornton, Zachary Macaulay, Thomas Clarkson, among others. Wilberforce, who became the Parliamentary leader of the abolition movement, was from the all white eastern seaport of Hull that was involved in Baltic Sea trade, not the slave trade, and his father was a prominent merchant. Henry Thornton and Zachary Macaulay became heavily involved in the settlement of Freetown as a settlement for displaced Africans through their participation in the Sierra Leone Company, which preceded the formal designation of Sierra Leone as a colony in 1807. Thomas Clarkson, the outspoken critic of slavery when he almost accidentally became interested in the subject as a student at Cambridge, was from Wisbech, a market town some 60 kms north of Cambridge in the Fens of the Isle of Ely. His brother, John, was to become the first Governor of the re-established settlement on the Sierra Leone peninsula but otherwise neither had any close association with Africans or former slaves.

Josiah Wedgwood, who made the medallion that came to symbolize the abolition movement, in 1787, "Am I not a Man and a Brother," showing a kneeling slave, his hands in chains, a figure based on the cameo temstones of antiquity by William Hackwood, is not modelled on a real person and hence more accurately represents the absence of the African voice in the abolition movement. There were exceptions.

James Ramsay, from Aberdeenshire in Scotland, who became a surgeon in the Royal Navy in 1757, became an abolitionist after observing the conditions on board an intercepted slave ship, and after being ordained in the Anglican church chose to pastor a church on St. Kitts in 1762, where he remained until 1777, encouraging both whites and Africans to attend his services. He became an outspoken critic of slavery, but died in 1789 as the abolition movement was gaining prominence in Parliament. Vassa apparently met Ramsay in the Caribbean and subsequently defended Ramsay's publications attacking slavery.

The most outstanding exception was Granville Sharp, a civil servant who worked in the Tower of London, originally from Durham in Northumberland. Sharp initially became involved in slavery in his attempt to free 20-year old Jonathan Strong from slavery in 1767, which resulted in the intervention of the Lord Mayor of London and Strong's independence. Sharp became even more closely identified with the plight of Africans in the case of James Somerset, who was eventually freed in the landmark decision of Lord Chief Justice Mansfield in May 1772. Vassa became acquainted with Sharp shortly thereafter, when Vassa tried unsuccessfully to gain the freedom of his friend and fellow shipmate, John Aines, through Sharp's intervention. Unfortunately for Aines, he was kidnapped and the secretly sent to the Caribbean where he was murdered, but thus began a long standing relationship between Sharp and Vassa that only ended with Vassa's death in 1797. Sharp was one of the last persons known to have visited Vassa on his death bed.

Otherwise, the Africans and former slaves who were associated with the abolition movement were on its fringes. Vassa was briefly Commissary of the Black Poor in the preparations for the first and unsuccessful attempt to send settlers to the Sierra Leone Peninsula. He was associated with a group known as the Sons of Africa in 1787-1788, who wrote letters to London newspapers. The Sons of Africa included Vasa, Ignatius Sancho and Ottobah Cugoano, among others.

Foremost in his relationships, he was one of several Blacks who identified with the Huntingdonian Connexion that was an early branch of the Methodist Church under the leadership of the Countess of Huntingdon, Selina Hastings, one of the few women who were influential in the largely male world of eighteenth century Britain. Many of the early African and Black intellectuals and writers in Britain and British North America were associated with the Huntingdonians, some strongly influenced by the inspiring sermons of George Whitefield, including Phillis Wheatley, George Marrant, and Robert Wedderburn.

Anti-Slavery Medallion designed by Josiah Wedgwood (1787), Wedgwood Manufactory, Art Institute Chicago. This medallion was adopted as the seal for the Society for the Abolition of the Slave Trade. 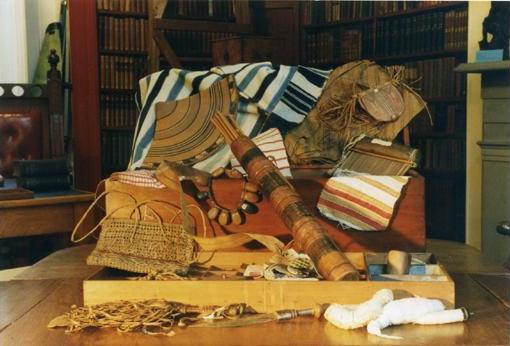 The Clarkson chest and its contents, Wisbech & Fenland Museum. Thomas Clarkson used the chest as a “travelling museum” in his campaign against the slave trade.