Ichi refers to a facial scarification ritual performed on noble men in the Awka-Nri region of Nigeria. Anthropologists have observed some cases in which women have received ichi in the Awgwu and Nkanu regions, although it is not as common. Ichi marks denote that the Igbo man has passed through the first stage of initiation into the Nze na Ozo society, the most important spiritual, religious and social association in Igbo society. The title affords these individuals extreme prestige, power, and influence in the community. Wearers of ichi are authorized to perform various rituals and to designate titles amongst village members. Nonetheless, it was customary for every Igbo male, regardless of status, to be familiar with the staple crop, the yam, which was a symbol of manhood. While ichi bearers did not live a life of leisure, it was taboo for them to perform certain routine tasks such as carrying a load on the head.

Historically, ichi marks were a representative feature of the ancient civilization of Nri, typical of the Awka-Nri areas. Those who wore them held the sacred power of the Eze Nri, the Priest-King of Nri, enabling them to perform ritual cleansings (ikpu alu) and to wield the staff of ancestral authority (ofo), and the spear of peace (otonsi). During the cutting ceremony, a traditional song was sung that drew a symbolic association between ichi, peacemaking, and spiritual royalty. The Nri people recognized two styles of ichi marks. The first was mgbuzu ichi, a series of lines cut from the center of the forehead down to the chin and from the right to the left cheek to resemble rays of sunshine. The extremely painful process of administration was reserved for those from royal lineages. The second style, ntuche (ichi nwadiokpala), consisted of a few lines radiating across each temple. The ritual of administration was a test of courage and endurance that could take as long as an hour and a half. The individual was expected to be silent throughout the process. The ichi marks distinguished Nri men from other Igbo people, affording them great respect. They were able to travel unharmed and often escape enslavement. This may have been the reason that other parts of Igboland, such as the Awgwu and Nkanu areas, adopted ichi marks. Those from the Awgwu and Nkanu areas had their own distinct style of scarification, which consisted of circles and semicircular patterns to represent the moon.

Vassa was born in “Essaka,” which was likely the present-day town of Isseke in the Anambra region that practiced ichi scarification. In his autobiography, he indicates that his father owned “many” slaves and was one of the elders in the village in which they lived, as attested by the fact that he had the ichi facial markings that designated that status. Vassa explained that the men on the ama ala (governing council), including his father, had the ichi marks, which

...is conferred on the person entitled to it, by cutting the skin across at the top of the forehead, and drawing it down to the eyebrows; and, while it is in this situation, applying a warm hand, and rubbing it until it shrinks up into a thick weal across the lower part of the forehead. Most of the judges and senators were thus marked; my father had long borne it, I had seen it conferred on one of my brothers, and I was also destined to receive it by my parents.

As a member of the ama ala, his father arranged for Vassa's brother to have the ichi mark, and Vassa was under the impression that he was to receive it, too, at the age of thirteen or fourteen, when he reached puberty. In Isseke custom, a wealthy, noble man, like his father, would have been expected to confer the ichi marks on all of his sons. The scarification ritual was an expensive endeavor and was the first of a series of ceremonies. His father would have had to provide the resources for the ritual, such as goats, yams, and palm wine.

The slave captain Hugh Crow described the practice, noting that merchants did not like to buy slaves who had the marks because of their status and the difficulty of making such males tractable. According to Crow (1830:199-200):

The Breeches [emhreche, i.e.. elders and members of the ama ala] informed us that, in their country, every seventh child of their class when about six or seven years of age undergoes the operation, to distinguish his rank, of having the skin of the forehead brought down from the hair so as to form a ridge or line from temple to temple. This disfigurement gives them a very disagreeable appearance, and the custom is chiefly confined to sons of great men and our author never saw one female so marked.

According to Crow, boys as young as six or seven were given the ichi mark, in contrast to Vassa’s expectations. By the 1740s and 1750s, if not earlier, the slave trade had infiltrated the Nri heartland of the Anambra valley and had diminished the relative safety afforded to those who wore ichi marks.

Vassa’s autobiography has been a crucial source in the reconstruction of history in the 18th century, as his references to ichi scarification and circumcision demonstrate. His description of scarification is one detail that helps substantiate his claim of where he was born. While Vassa was mistaken about some details of his homeland and may have embellished and romanticized his descriptions, what he did not get wrong is that he was born there.

Lovejoy, Paul E. “Scarification and the Loss of History in the African Diaspora,” in Andrew Apter and Lauren Derby, ed., Activating the Past: History and Memory in the Black Atlantic West (Newcastle: Cambridge Scholars Publishing, 2010), 99-138. 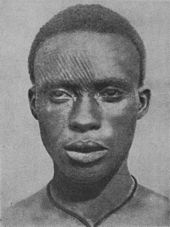 A photo of a man with ichi marks in Northcote W. Thomas’s Anthropological Report on the Ibo-Speaking People of Nigeria (London: Harrison and Sons, 1913), Plate XVII.