George Whitefield was one of the founding members of the Methodist movement and a major force in the widespread revival of evangelism in the early 18th century. He was born on December 16, 1714 in Gloucester, England, into a modest household. His father, Thomas Whitefield, and his wife, Elizabeth, owned a local inn and had seven children, six sons and one daughter. At the age of two, his father passed away and his mother subsequently re-married. As a young boy, he loved to act and perform in school plays and was often caught skipping class to practice his lines. He was mercilessly bullied by his peers for a permanent eye squint that he had developed from a bout with measles. When he was a teenager, his family fell on hard times due to his stepfather’s mismanagement of the inn’s finances and he was forced to leave school to help keep the inn afloat.

On November 7, 1732, Whitefield enrolled in Pembroke College, Oxford. He paid for his education by waiting on the university’s wealthier students. While at Oxford, he met John Wesley and his brother Charles, who ran the “Holy Club,” a group that preached self-denial, meticulous self-examination and the pursuit of a devout Christian life. Whitefield’s participation in this group marked the emergence of Methodism, whose adherents sought to reform Anglicanism by integrating a routine of personal devotion and charitable acts. The Holy Club was shunned by the Oxford community who considered the group to be “religious fanatics.” Whitefield later recounted spending days and weeks lying flat on the ground and praying constantly. After one particular fast, he became extremely ill and was forced to take a break from school to recover. Once he had regained his strength, he took over the Holy Club.

Upon graduation, he decided to join the Wesley brothers at a new colony in Georgia. After numerous delays, he temporarily abandoned the mission and was ordained as a deacon in Gloucester Cathedral on June 20, 1736. He began preaching in London to crowds who were enthralled by his unconventional sermons. He set sail for Georgia in February of 1738, arriving at the colony on May 7, 1738. Inspired by the Halle Orphanage in Germany, he returned to England after four months with plans to open a similar establishment. Construction of Bethesda Orphanage began on March 25, 1740.

In 1739, Whitefield and William Seward, his publicist and wealthy layman, embarked on a tour of the American colonies, visiting Boston, New York, and Philadelphia. Conservative Anglicans criticized Whitefield and the Wesley brothers for their fervent preaching style. They saw them as potential dissenting separatists and did not welcome them in their churches. As a result, Whitefield was forced to preach in “open-air.” His enthusiastic approach to delivering his sermons attracted crowds of people, audiences which he claimed were as large as 30,000. He preached the necessity of a conversion experience, an inner regeneration brought on by the Holy Spirit, which he referred to as the “new birth.” What made Whitefield so appealing was that he extended his services to all individuals, regardless of social status or class. However, his Calvanist orientation and adherence to the idea of “predestination” eventually caused a stark theological divide within the Methodist movement and ultimately destroyed his relationship with the Wesley brothers. His arrival in America corresponded with several spiritual revivals and he became one of the most visible figures of the “Great Awakening,” a formative period in American history. He returned to England in 1741 to raise funds to build an academy at his orphanage in Georgia. That same year he married Elizabeth Burnell James with whom he had one child, who died in infancy.

At times Whitefield was conflicted about slavery. While he was by no means an abolitionist, he sought out audiences of enslaved Africans and was so widely accepted by the African community that some historians believe this period to be the origin of African-American Christianity. In 1740, he published a criticism of the treatment of enslaved Africans in the southern colonies, chastising plantation owners for their brutality. Nonetheless, he did not pass moral judgment on slavery as an institution and even blamed the financial troubles of Bethesda Orphanage on the prohibition of slavery in the colony. Georgia was unique in that under the guidance of James Oglethorpe, it had banned slavery in 1735. Between 1748 to 1750, Whitefield campaigned for new legislation and in 1751 slavery was legalized by royal decree.

He made 14 visits to Scotland. From 1744 to 1748, he preached in a number of cities in North America. At the end of his trip, he returned to England and became the personal chaplain for Selina Hastings, the Countess of Huntingdon, known for her role in establishing the “Huntingdon Connexion,” a string of Calvanist Methodist chapels throughout Britain. He then gave up his leadership of the Calvanistic Methodists. In his final years, although suffering from poor health, he made a number of trips back to America and Scotland. It was at one of these sermons in Savannah on February 10, 1765 that Gustavus Vassa first encountered the celebrated Methodist preacher and was greatly inspired by his fervour and earnestness (although Vassa mistakenly indicates the year as 1766 in his narrative). The notion of predestination was particularly compelling to black authors like Vassa whose ability to perform charitable actions would have been severely restricted by racial hierarchies. Whitefield’s religious influence on Vassa was so profound that when Vassa died on March 31, 1797, he was buried at Whitefield’s Tabernacle, a Methodist chapel built in his honour in 1756 on Tottenham Court Road in London, now the site of the American International Church. Whitefield died on September 30, 1770 in the parsonage of Old South Presbyterian Church in Newburyport, Massachusetts, following a two-hour open-air sermon. He is buried under the pulpit of the church. 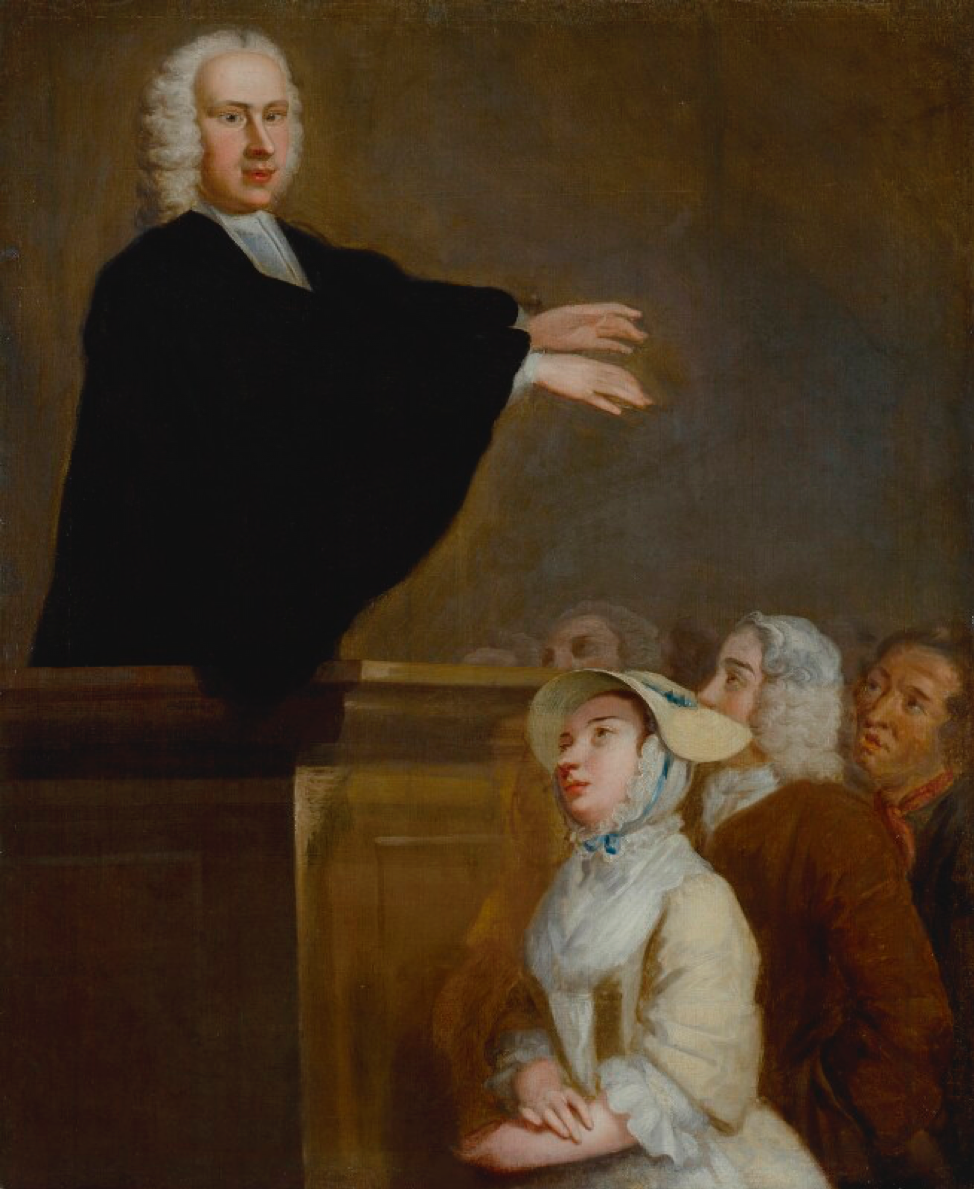