Ukawsaw Gronniosaw, often referred to as James Albert, was a formerly enslaved man, best known for his autobiography, A Narrative of the Most Remarkable Particulars in the Life of James Albert Ukawsaw Gronniosaw.His memoir wasthe first of its kind to be published by an African person in Britain.In his narrative, he recounts his life in West Africa prior to being sold into slavery, as well as his experiences in America as an enslaved and a free man.

Gronniosaw was born in 1705 in what he refers to as Bournou in Zaara. It is possible that Bournou was Borno, a kingdom in what is now northeastern Nigeria. One of the provinces of Borno at the time was Zaria, usually known as Zazzau. Gronniosaw was the youngest of six children and the grandson of the king of Zaara. Borno was an area with a strong Muslim influence in which locals were known to mix their Islamic faith with non-Muslim practices. It is possible that Gronniosaw was born a Muslim but converted to Christianity during enslavement. At 15 years old, Gronniosaw was captured and sold by a Gold Coast Ivory merchant to a Dutch captain. He was later brought to Barbados where he was sold to an American known only as Mr. Vanhorn from New York, in 1730. The American took him to New York and resold him to Theodorus Frelinghuysen, a Calvinist minister in New Jersey. While in New Jersey, Gronniosaw was taught to read and learned the principles of Calvinist practice. When Frelinghuysen died in 1747, his will granted Gronniosaw his freedom.

While dates are unclear, by his own account, Gronniosaw subsequently travelled to the Netherlands where he worked as a cook on a ship during the Seven Years War. He later enlisted in the British army in hopes of earning enough money to relocate to England. He served in Martinique and in Cuba before he was discharged and sailed to England. Upon arriving in Portsmouth, he was cheated out of the majority of his savings by his landlady and was forced to relocate to London in 1763. That same year, he met and married his English wife Betty, a white widow and textile worker. Together, they had two children in addition to one from Betty’s previous relationship. When Betty lost her job due to the financial crisis, the family was forced to move to Colchester. There, Gronniosaw found employment as a builder with a Quaker named Osgood Hanbury. Due to the seasonal nature of building work, the family once again faced financial hardship. They moved to Norwich where they received financial aid from another Quaker by the name of Henry Gurney, who paid their rent. During this time, one of Gronniosaw’s children passed away. At first, the Quaker Meeting House refused to bury her as she was not baptised but later allowed her to be buried in the churchyard under the condition that the minister not be involved in the service.

The family pawned their possessions and moved to Kidderminster, where Betty found employment as a weaver. Gronniosaw’s remaining children; Mary, Edward, and his newborn son Samuel, were baptised on Christmas day in 1771 by Benjamin Fawcett, a Calvinist minister and associate of Selina Hastings, the Countess of Huntingdon. Soon after, Gronniosaw received a letter and donation from Hastings. He thanked her for the donation on January 3, 1772, stating that it arrived “at a time of great necessity.” Gronniosaw’s fifth child, James Jr., was also baptised by Fawcett on June 25, 1774.

In 1772, A Narrative of the Most Remarkable Particulars in the Life of James Albert Ukawsaw Gronniosaw, an African Prince, As Related by Himself,began production. The memoir was supported by the Countess of Huntingdon, and is often considered the first “slave narrative.” Over the years, the Countess was introduced to a number of black authors through her personal chaplain, George Whitefield. Whitefield preached in a number of cities in North America and England. His open-air sermons exposed many black authors, such as Gronniosaw, Phillis Wheatley, Gustavus Vassa and John Marrant, to his brand of Calvinist Methodism which was known as the “Huntingdon Connexion.” While it is unknown whether Vassa and Gronniosaw ever met in person, it is clear that they shared a mutual interest in methodism. By the time Vassa published the first edition of his autobiography in 1789, Gronniosaw’s memoir had been published at least ten times in Britain and America. Vassa’s style of writing in his autobiography was likely influenced by the way in which Gronniosaw wrote about his own life experiences and religious conversion. Both Vassa and Gronniosaw describe their quest for knowledge through the anecdote of “talking to books.” When recollecting a scene from his youth, Gronniosaw indicates in his memoir that he was under the impression that his master was having a conversation with a book, on account of him moving his lips while reading. However, he was left “greatly disappointed” when he found that a book would not speak to him. Similarly, Vassa indicates that he often talked to books, placing his ear against them, in hopes of the book answering back, only to be left disappointed by the silence. The trope of the “talking book” subsequently became a literary tradition utilized by black authors like Vassa, Marrant, Cugoano, and John Jea. Gronniosaw died in Chester in September of 1775. Little is known of the final years of his life.

Caretta, Vincent. Unchained Voices: An Anthology of Black Authors in the English Speaking World of the Eighteenth Century(Kentucky: University of Kentucky Press, 2003).

This webpage was last updated on 19-May-2020, Kartikay Chadha 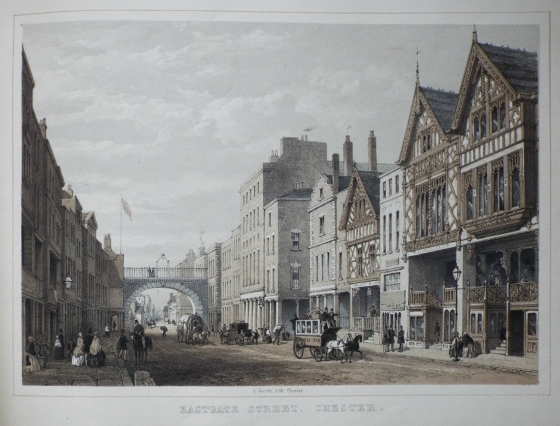 Painting of Eastgate Street, Chester by John Gresty (1865) in Gretsy’s Illustrated Chester: Consisting of Eight Large Chromo Lithographic Views from Photographys,&c. : with a Plan of the City, Descriptive Letterpress, a Useful Business Directory & a Breif Sketch of Eaton Hall.