Phillis Wheatly was the first African American woman to publish a book of poetry. She was born and raised in West Africa until the age of seven or eight when she was sold into slavery and transported to North America. Upon her arrival in 1761, Whitley was eventually enslaved to John Wheatley and his wife Susanna, who taught her how to read and write. The Wheatley family supported Phillis in her education and encouraged her to pursue poetry when they noticed her talent.

In 1773, at the age of 20, Phillis joined the Wheatleys’s son Nathaniel on a trip to London, seeking publication of her work. During her time in London, Selina Hastings, the Countess of Huntingdon, grew interested in Phillis’ poetry. She served as the patron for Wheatley’s volume of works, Poems on Various Subjects, Religious and Moral by Phillis Wheatley, Negro Servant to Mr. John Wheatley, of Boston, In New England, thus securing its publication in 1773. Wheatley never met Hastings because of the Countess’s illness, but Wheatley did become associated with the Huntingdonian Methodists, and Wheatley dedicated her volume of poems to the Countess. Some of their correspondence is extant. The publication of her collection made Wheatley the first African American and first enslaved person to publish a book of poetry. She was also the third American woman to publish poetry.

Wheatley exhibited vigorous support for the American war for independence. In 1775, she sent Continental Army’s commander, George Washington, one of her many poems honouring him. This led to Washington inviting her to visit him at his headquarters in Cambridge, Massachusetts, to which she accepted, visiting him in March 1776.

16 years later, Gustavus Vassa published his Interesting Narrative, with the support of Selina Hastings, much like Wheatley. Both writers were sold into enslavement during childhood and brought to North America. They wrote about their experience of the Middle Passage, but with predominantly polarizing accounts. On various occasions, Vassa wrote about the horrors of slavery and stood firmly as an abolitionist. Wheatley, on the other hand, seldom wrote about her personal experience of enslavement. In one of the few instances where she speaks about her experience, she wrote “Twas mercy brought me from my Pagan land/ Taught my benighted soul to understand/ That there’s a God, that there’s a Saviour too/ Once I redemption neither sought nor knew.” However, in another account she said “I, young in life, by seeming cruel fate,/Was snatch’d from Afric’s fancy’d happy seat/What pangs excruciating must molest/What sorrows labour in my parent’s breast?”

Once her book was published in November 1773, Phillis was formally emancipated by the Wheatley family. Following the death of both Susanna and John Wheatley, Phillis met and married free Black grocer, John Peters in 1778. Together, they had three children, two of whom died during infancy. The couple endured a constant battle with poverty, causing Wheatley to be forced to find work as a maid. Though she continued to write, many cite the rapidly developing tensions with the British and the eventual Revolutionary war as being a cause in a lack of support of Wheatley’s poetry. She made numerous attempts to get a second volume of her poetry to no avail. After her husband was imprisoned on debt related charges, Wheatley fell deeper into poverty and died due to illness in Boston, Massachusetts, on December 5, 1784. 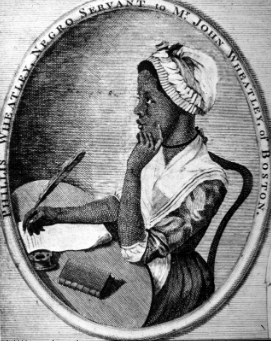