Vassa’s fellow sailor John Mondle appeared in The Interesting Narrative, as a gunner, when Vassa served under Captain Pascal on the HMS Aetna fireship during the attack on Belle-Île-en-Mer in March 1761. Vassa described Mondle as “a man of very indifferent morals.” A court martial on April 7, 1762 convicted him of “Breach of Discipline and other Misbehaviour” on the Aetna.

Vassa on Mondle in The Interesting Narrative 9th ed.

We had on board [the H.M.S. Aetna] a gunner, whose name was John Mondle, a man of very indifferent morals. This man’s cabin was between the decks, exactly over where I lay, a-breast of the quarter-deck ladder. One night, the 5th of April, being terrified with a dream, he awoke in so great a fright that he could not rest in his bed any longer, nor even remain in his cabin; and he went upon deck about four o’clock in the morning, extremely agitated. He immediately told those upon the deck of the agonies of his mind, and the dream which occasioned it; in which he said he had seen many things very awful, and had been warned by St. Peter to repent, who told him his time was short. This he said had greatly alarmed him, and he was determined to alter his life. People generally mock the fears of others when they are themselves in safety; and some of his shipmates who heard him only laughed at him. However, he made a vow that he never would drink strong liquors again; and he immediately got a light, and gave away his sea-stores of liquor. After which, his agitation still continuing, he began to read the scriptures, hoping to find some relief and soon afterwards he laid himself down again on his bed, and endeavoured to compose himself to sleep, but to no purpose; his mind still continuing in a state of agony. By this time it was exactly half after seven in the morning; I was then under the half deck at the great cabin door; and all at once I heard the people in the waist cry out most fearfully-“The Lord have mercy upon us! We are all lost! The Lord have mercy upon us!”-Mr. Mondle hearing the cries, immediately ran out of his cabin; and we were instantly struck by the Lynne, a forty-gun ship, Captain Clerk, which nearly ran us down. This ship had just put about, and was by the wind, but had not got full head-way, or we must all have perished; for the wind was brisk. However, before Mr. Mondle had got four steps from his cabin door, she struck our ship, with her cutwater, right in the middle of his bed and cabin, and ran it up to the combings of the quarter deck hatchway, and above three feet below water, and in a minute there was not a bit of wood to be seen where Mr. Mondle’s cabin stood; and he was so near being killed, that some of the splinters tore his face. As Mr. Mondle must inevitably have perished from this accident, had he not been alarmed in the very extraordinary way I have related, I could not help regarding this as an awful interposition of Providence for his preservation. The two ships for some time swinged alongside of each other; for ours being a fireship, our grappling-irons caught the Lynne every way, and the yards and rigging went at an astonishing rate. (Pg. 86-87)

This escape of Mr. Mondle, which he, as well as myself, always considered as a singular act of Providence, I believe had a great influence on his life and conduct ever afterwards. (Pg. 87)

[Equiano’s note, eds. 1-9.] Some people have it, that sometimes before persons die, their ward is seen; that is, some spirit, exactly in their likeness, though they are themselves at other places at the same time. One day while we were at Bayonne, Mr. Mondle saw one of our men, as he thought in the gun room; and a little after, coming on the quarter-deck, he spoke of the circumstance of this man to some of the officers. They told him that this man was then out of the ship, in one of the boats with the lieutenant; but Mr. Mondle would not believe it, and we searched the ship, when we found the man was actually out of her; and when the boat returned sometime afterwards, we found the man had been drowned the very time Mr. Mondle thought he saw him. (Carretta, Penguin ed., pg. 266, note 257)

All official records identify him as John Mundall, Gunner (PRO ADM 32/5; PRO ADM 1/5301). His “very indifferent morals” probably contributed to his conviction by a court martial on 7 April 1762 on charges of “Breach of Discipline and other Misbehaviour” while serving under “Captain Paschal” [sic] on “the Aetna Fireship” (PRO ADM 1/5301). (Carretta, Penguin ed., pg. 263, note 227) 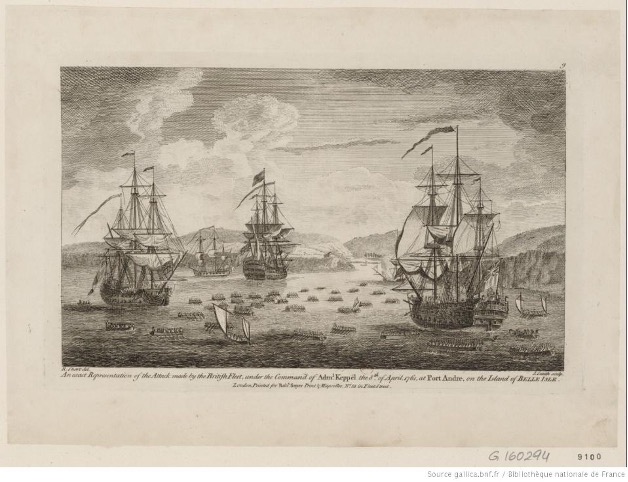 Attack of the island of Belle-Isle by the English Admiral Keppel: [print] Smith, J. (1761) - National Library of France