Keppel was a British Naval officer during the Seven Years War, he also participated in the War of American Independence. Keppel was born on 25 April 1725 into a wealthy upper-class family elated to the Prince of Orange of the Netherlands. After his retirement from the Navy, Keppel served in the House of Commons from 1755 to 1782. He was court-martialed in July of 1778 due to a disagreement with Sir Hugh Palliser (1723-1769), although he was eventually found innocent. Keppel also served as First Lord of the Admiralty during the final years of the American Revolution.

Augustus was the second of fifteen children born to Anne van Keppel and Willem van Keppel, a Whig aristocrat and diplomat. He studied at Westminster School, but he was sent to sea at the age of ten in 1735 aboard the Oxford frigate, under the command of Captain William Swayle (d. 1736) heading to the coast of Guinea. He next served in the Mediterranean on the Gloucester. He was promoted to acting lieutenant for seven years in March 1742.

He was introduced to Joshua Reynolds (1723-1792) in 1749. He invited him to Minorca while he was the Commodore commanding the Mediterranean fleet. Joshua was on his way to Italy to further his studies. As appreciation, Reynolds painted six portraits of Keppel along with the other officers which brought him fame and recognition. Keppel returned to England in 1751.

Keppel served in the Seven Years’ War as Commodore of the North American station from 1751 to 1755. He served on the coast of France in 1758 in the Torbay and participated in the Battle of Quiberon Bay in November 1759. In 1757, he was one of the jurors during the court martial of John Byng (1704-1757). Keppel did not want Byng convicted, who was ultimately executed.

Keppel commanded the taking of Goree in 1758, and in 1779, he served under Hawke in the battle of Quiberon Bay. His command at the capture of Belle Isle in 1761 brought him repute. His health was undermined in Havana due to fever which gained him further prominence, for which he received £25,000.

Keppel also commanded a ship during the American War of Independence in 1778 which was unsuccessful in halting the French from uniting its Mediterranean and Atlantic fleets. As a result Sir Charles Hardy replaced him as commander of the British fleet. In 1782, he was promoted Viscount of Elveden in the County of Suffolk. Augustus died unmarried on 2 October 1786, at the age of 61.

Vassa on Augustus Keppel in The Interesting Narrative 9th ed.

While I was here, I met with a trifling incident which surprised me agreeably. I was one day in a field belonging to a gentleman who had a black boy about my own size; this boy having observed me from his master’s house, was transported at the sight of one of his own countrymen, and ran to meet me with the utmost haste. I not knowing what he was about, turned a little out of his way at first, but to no purpose; he soon came close to me, and caught hold of me in his arms as if I had been his brother, though we had never seen each other before. After we had talked together for some time, he took me to his master’s house, where I was treated very kindly. This benevolent boy and I were very happy in frequently seeing each other, till about the month of March 1761, when our ship had orders to fit out again for another expedition. When we got ready, we joined a very large fleet at Spithead, commanded by Commodore Keppel, destined against Belle-Isle; and having a number of transport ships in company, with troops on board, to make a descent on the place, we sailed once more in quest of fame. I longed to engage in new adventures, and to see fresh wonders. (Pg. 85)

Keppel: Commodore Augustus Keppel (1725-1786), later (1782) First Viscount Keppel. During the eighteenth century, Commodore was a temporary title given to a post-captain who had the responsibilities of a rear admiral (that is, command of a division of the squadron) but, because of lack of seniority, not the rank. Belle-Isle: the siege and conquest of this island in Quiberon Bay by the combined sea and land forces under Keppel and General Studholme Hodgson, respectively, against the French garrison commanded by General Chevalier de Saint Croix took place 7 April-8 June 1761. (Caretta, Penguin ed., pg. 263, note 226)

Bruyn, De Frans, and Shaun Regan. The Culture of the Seven Years' War: Empire, Identity, and the Arts in the Eighteenth-Century Atlantic World. Toronto: University of Toronto Press, 2014.

Keppel, Augustus. The Trial of the Honourable Augustus Keppel, Admiral of the Blue Squadron, at a Court Martial Held on Board His Majesty's Ship Britannia, in Portsmouth Harbour, on Thursday, January 8. 1779, before Admiral Sir Thomas Pye, President, upon a Charge Exhibited against Him by Vice Admiral Sir Hugh Palliser, for Misconduct and Neglect of Duty ; to Which Is Annexed Several Interesting Letters and Papers Relative to the Subject ... Faithfully Taken down in Court, by Thomas Blandemor .. Portsmouth: J. Wilkes, Breadhower and Peadle, 1779. 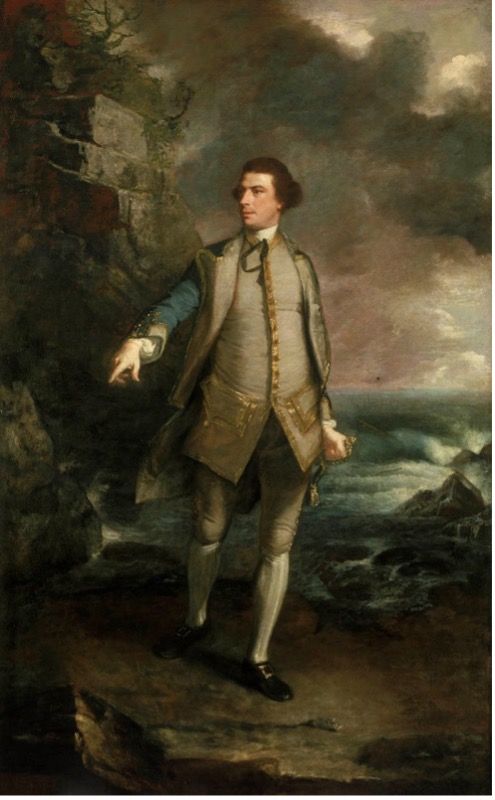 Captain the Honourable Augustus Keppel, 1725-86, A full-length portrait of Keppel after his shipwreck on the Maidstone in 1747 by Joshua Reynolds, circa 1752.  [Royal Museum, Greenwich.]