Gustav III was the King of Sweden from 1771 until his death in 1792. He was the oldest son of Queen Louise Ulrika and King Adolf Fredrick. Early in his reign , Gustav tried to re-establish Sweden as a “Great Power” in Europe. This aim was manifested through the acquisition of the West Indian island of Saint-Barthélemy from the French in 1784. This venture alarmed many Swedish councillors due to the island’s lack of agricultural production. Swedish consul-general Simon Bérard suggested that the island should instead become a free port. During this time, France was having difficulty supplying enough enslaved persons to its colonies in the Caribbean. In response, Sweden decided to transport a certain number of enslaved persons to the French colonies every year. If the island were to become a success, Sweden could expand its colonialism to other islands in the region. In addition, King Gustav was aware that countries in Europe involved in the slave trade benefited economically from it.

Under Gustav III, the Swedish West India Company was established in 1786. Gustav allowed anyone who could to buy shares; however, he retained 10 percent of the shares for himself, making him the largest shareholder.

March 12, 1990 marked the implementation of a new custom tax and constitution on the island. The purpose of both were to turn Saint- Barthélemy into a haven for slave traders. These new laws created amazing opportunities for traders world-wide. Buyers from all over the Caribbean came to Saint- Barthélemy to purchase enslaved people. The government charged a minor export duty fee on enslaved people sold from Saint- Barthélemy to other colonies. This duty was further halved for enslaved people brought from Africa on Swedish ships, producing increased profits for the Swedish West India Company as well as other Swedish traders.

Back in Sweden, Gustav was vocal in his opposition of the abuse of political power and privileges by the nobility upon the death of King Charles XII. He seized power in a coup called the Swedish Revolution in 1772, ending the "Age of Liberty." He then initiated a campaign intended to restore a form of Royal autocracy, which was followed by the Union and Security Act of 1789. This act abolished most of the powers granted to the Swedish parliament during the Age of Liberty. It also granted government opportunities to all citizens, putting an end to the privileges of the nobility.

Additional controversy plagued his reign throughout 1789 and 1790 after Gustav declared war on Russia. During the Russo-Swedish War, a group of Swedish officers known as the Anjala League were charged with treason, which was further complicated when Denmark joined the war as allies of Russia. The war ended with the Battle of Svensksund on July 9, 1790 in which the Swedes successfully broke a Russian blockade. The battle is considered the greatest victory ever achieved by the Swedish Navy, resulting in Russia losing one-third of its fleet and 7,000 men. The war ended with the Treaty of Värälä, signed on August 14, 1790.

Gustav’s controversial reign increased the hostility of the nobility, leading to a conspiracy to have him killed in order to change the constitution. The king was assassinated at midnight during a masked ball that took place at the Royal Opera House in Stockholm on March 16, 1792. Gustav III’s death occurred only days before a Danish law was adopted to abolish the slave trade, although that law did not come into effect until January 1, 1803. It is through the coincidence of Gustav's assassination and the passage of Danish prohibition of the slave trade that connected Gustavus Vassa with King Gustav III. The assassination of Gustavus III inspired the subsequent opera by Giuseppe Verdi, Un ballo in maschera, (A Masked Ball) composed in 1859. The opera was a three-act adaptation of a text by Antonio Somma, that was further adapted from a libretto written by Eugène Scribe’s for playwright Daniel Auber’s Gustave III, ou Le bal masque, a five-act opera premiering in 1833. 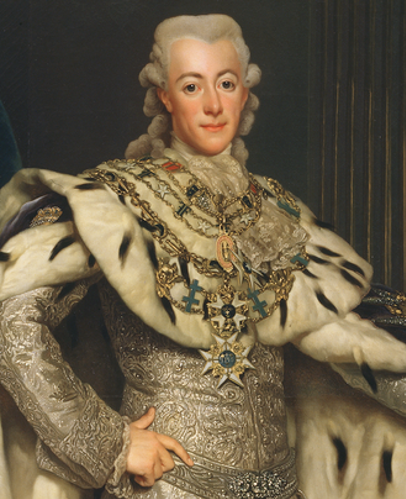