Robert King was born in Philadelphia some time before 1735. He was a prominent merchant stationed in Montserrat and was Gustavus Vassa’s slave master from 1763 to 1766. Not much is known about his personal life, aside from him having two sisters who resided in Philadelphia, who apparently were Quakers. After sailing with Lt. Michael Henry Pascal for eight years, Pascal sold Vassa to Captain James Doran in London. Doran subsequently took Vassa to Montserrat, which would be his home for the next three and a half years. In mid-May of 1763, Doran in turn sold Vassa to Robert King, whom Doran described as the “very best master on the whole island.” King claimed to be a Quaker, although his involvement in the slave trade casts some doubt on his commitment to the Society of Friends. At the time, most Quakers saw slavery as a serious moral issue, sometimes excommunicating members who were slave dealers or owners. King was not the only Quaker to disobey the society’s rules, for many of those who lived in Montserrat saw slavery as an economic necessity in order to remain competitive in the Caribbean market. As a merchant, King dealt with a variety of goods including rum and sugar, among other things, which he purchased throughout the Caribbean with the help of his six employees and a small fleet of vessels. His vessels made many trips throughout the year, particularly to his hometown of Philadelphia, where he had connections with an unknown mercantile house. Vassa became involved in all aspects of King’s business, acting as a clerk, a barber, and a deckhand, making him invaluable.

According to Vassa, King was a model slave master. He describes him as kind, charitable, and humane. At one point, King even offered to put Vassa through school and train him as a clerk upon their return to Philadelphia. His incentive for treating Vassa in such a way was due to his belief that hospitable treatment produced the most productive slaves, as well as increased their longevity and fertility. He was often criticized by fellow owners for treating his slaves so well. He did not believe in physical punishment, and if one of his captives disobeyed or otherwise displeased him, he would merely threaten to sell them. Due to this reputation of being a “man of feeling,” those under his control appear to have served him faithfully. If he came across individuals who had been mistreated or shortchanged by their owners, he was known to supply them with food and drink and would intercede on their behalf to recoup the money that they were owed.

One of King’s employees, Captain Thomas Farmer, an Englishman who commanded a Bermuda ship, became aware of Vassa’s experience serving on trading sloops and urged King to allow him to join his crew. King initially refused, for fear that Vassa would escape, but eventually gave in and allowed Farmer to employ him for short trips. He became an indispensable member of the crew and was allowed to serve on longer voyages. This gave Vassa the leverage to demand better lodgings, more food, and a meager pay for his services. In 1764, Farmer took command of King’s ship the Prudence, bound for Philadelphia with a cargo of enslaved Africans. Prior to departure, King and Farmer threatened to sell Vassa, having heard rumours that he was planning on running away. Fortunately, Vassa was able to regain their trust and convince them otherwise.

In 1765, Vassa made another trip to Philadelphia on board King’s ship. Vassa was equipped with 42 gallons of rum and another of sugar, which he sold upon arrival in Philadelphia. That same year, King promised Vassa that if he were to raise £40, the amount that he had paid for him, he could purchase his freedom. With this in mind, Vassa utilized his increased mobility on the ship and access to various goods to start his own business, selling tumblers, glasses, and gin in Montserrat. In 1766, King purchased a much larger ship, the Nancy, which provided Vassa with extra room to store his merchandise. He was then able to sell more goods and eventually saved enough money for his purchase price. King was good on his promise and granted him his freedom. Vassa’s freedom was made official on July 11, 1766, when King wrote and signed his Certificate of Emancipation. While Vassa wanted to return to England, he continued to work for Farmer and King, no longer as a captive but as an employee. When Farmer died, Vassa saw no more reason to stay in the West Indies and in the spring of 1767, bid farewell to King before returning to England. Upon leaving, King provided Vassa with a character reference for future employment, dated July 26, 1767, which indicated that he had behaved well and was discharged with honesty and assiduity. After Vassa was gone, King suffered a number of hardships, including a flood that destroyed his home and property and almost took his life. King’s name is mentioned in a motion signed by Terry Legay, President in Council in Montserrat, on April 4, 1767, in reference to an act for cleansing and repairing the houses affected by the flood. Little else is known about his life following Vassa’s departure. According to Carretta, it is likely that Robert King was the same individual involved in a legal action launched against Walter Tulliedeph on April 13, 1769, “for Slaves other livestock and Plantation” in Montserrat. 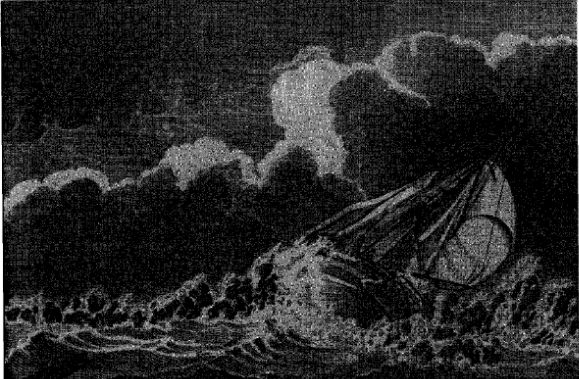 Frontispiece from the first edition of volume 2 of Gustavus Vassa’s autobiography. Drawing depicts the wreck of Robert King’s ship the Nancy that Vassa had assumed command.