James Watt was a Scottish mechanical engineer, inventor, and chemist, best known for having improved Thomas Newcomen's atmospheric engine, invented in 1712. He is popularly credited with the invention of the steam engine. He was born on January 19, 1736 in Greenock, Renfrewshire to parents James and Agnes Watt. He was the sole surviving child of five, the three eldest having died in infancy and the youngest having drowned at the age of 24. His mother came from a respected family and was well educated. His father was a shipwright, ship owner and contractor. From a young age, Watt was chronically ill. As a result, he was home schooled for the first few years of his education. When he began attending a formal school, he struggled to meet standards; however, by the age of 13, he had excelled far ahead of his classmates and demonstrated exceptional skill in mathematics.

His father's workshop provided him with ample opportunity to experiment with the manufacture of mechanical parts and nautical instruments. He enjoyed watching his father work and took interest in recreating what he saw, as such he became highly skilled at making models like pulleys, pumps, capstans, barrel-organs, and cranes. He was fascinated by science, geometry and mechanics, and later took interest in geology, botany, astronomy, and anatomy. In 1753, when he was 17, his mother passed away. Her death disrupted family life in Greenock. In June of 1754, at 18 years old, he was sent to Glasgow to find an apprenticeship with a mathematical instrument maker. When he first arrived in Glasgow, he had significant difficulty as a foreigner finding work. He spent a year apprenticing with working under a mechanic who referred to himself as an optician, until his work caught the attention of Dr. Robert Dick, a Professor of Natural Philosophy at the University of Glasgow. Recognizing his brilliant mind, the Professor Dick suggested he travel to London to receive further training, where he . On June 7, 1755, Watt set out for London. It took him three weeks before he secured a job with Mr. John Morgan of Cornhill in 1755, although he did not receive compensation for his labour. Determined to prove his worth, Watt worked endless hours and his health ultimately suffered. He experienced painful bouts of rheumatism and was forced to leave London on account of his poor health. In August of that year, he travelled backreturned to Glasgow, where he . Having completed an apprenticeship in London, he hoped to set up his own shop but was denied permission. It was not until he ran into his old friend, Dr. Dick, that he was able to secured work at the University of Glasgow, repairing astronomical instruments. In 1759, he went into business with John Craig, an architect and businessman named John Craig. Craigwho provided the capital for a workshop that eventually moved to needed for expansion and the business began to grow and Watt was able to open a larger shop in Saltmarket.

In July of 1765, he wed his cousin, Margaret Miller. The couple had two children. In that same year, his business partner passed awaydied. At this time, he had already begun experimenting with the steam -engine. Of course, Watt did not actually invent the steam engine, but dramatically improved its the efficiency from the existingof the Newcomen engine by adding a separate condenser. In 1763, the University of Glasgow asked him to repair a model Newcomen engine, which provided him with the opportunity to experiment with its mechanics. After much experimentation, in May of 1765, he made the fortunate discovery that uponthe condensationing of the steam by cold in a separate vessel, turning more thermal energy could be converted into mechanical energy. Recognizing the genius of this improvement, Watt invested significant capital into pursuingin a patent on the engine. . Strapped for resources, in 1767, he was forced to supplement his income by working as a land surveyor. In 1768, he entered into a partnership with British physician, chemist, and inventor, John Roebuck, the founder of the Carron Works. In 1769, his patent for "A New Invented Method of Lessening the Consumption of Stream and Fuel in Fire Engines" was finalized. The partnership between Watt and Roebuck disintegrated in 1772 when Roebuck went bankrupt. Matthew Boulton, English engineer and the manufacturer of the Soho Works in Birmingham, took over Roebuck's share in Watt's patent. The partnership between Boulton and Watt would ultimately last 25 years. In September of 1773, Watt learned his wife Margaret, pregnant with their third child, was terminally ill. She passed away soon after, his unborn child did not survive. Eager to return to his work on the steam engine, Watt moved to Birmingham in 1774. Boulton and Watt made rapid progress on the engine and in 1776, two engines were installed, one at the Staffordshire colliery and another in the shop of famous ironmaster, John Wilkinson. That same year, Watt married his second wife, Ann MacGregor who gave birth to two more of his children. From 1778 to 1780, distinguished chemist and industrialist, James Keir, assumed a management and consultant role at the Soho Company while Boulton and Watt were away perfecting their steam engine business. While it is unknown if Keir and Vassa ever met, Keir and Alexander Blair were partners in 1778 in Tipton Chemical Works, a soap manufactory that produced nitric and hydrochloric acids, red and white lead, and alkali, among other chemicals. Blair was a co-investor in Dr. Charles Irving's scheme of 1776, which sought to establish a plantation to produce castor oil and cotton on the British- controlled Mosquito Shore. Blair and Irving hired Gustavus Vassa as the overseer of the Mosquito Shore project; however, Vassa abandoned the scheme in June of 1776.

Over the following decades, Watt made a number of adjustments to the engine. In 1790, he completed the engine with the addition ofadded a pressure gauge. In 1795, Watt and Boulton purchased a property on the Birmingham Canal, which became the Soho Foundry. Five years later, in 1800, Watt retired. The famous patent subsequently expired and Boulton and Watt's sons took over the partnership. Watt continued to experiment with various inventions until his death on August 25, 1819. His famed improvement to the steam engine is recognized as the "mechanical workhorse of the Industrial Revolution." 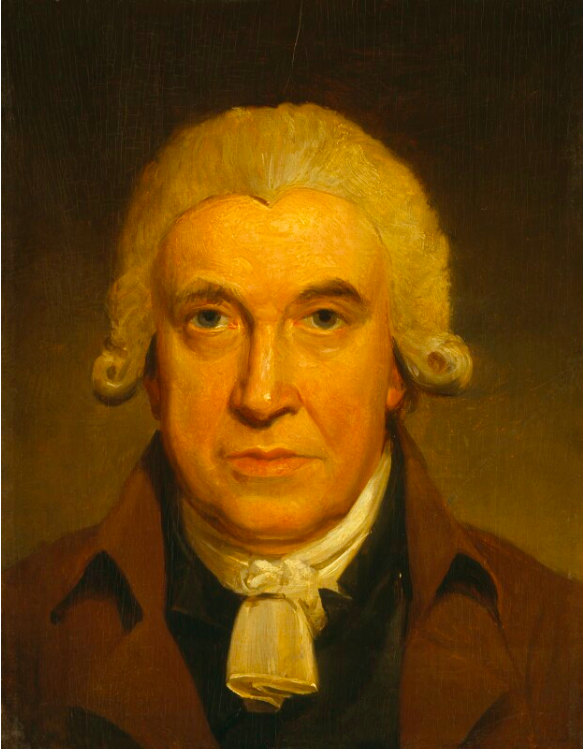