Selina Hastings, the Countess of Huntingdon, was the patroness of a dissenting group of Methodists in the Calvinist tradition. Her followers, referred to as Huntingdonians, were initially allied with the Methodists led by John and Charles Wesley. The Methodists preached self-denial, meticulous self-examination and the pursuit of a devout Christian life. Its leaders sought to reform Anglicanism by integrating a routine of personal devotion and charitable acts and were thus deemed dissenting separatists. By the late 1770s the Methodists were systematically excommunicated from the Anglican church. Whitefield and the Wesley brothers were often not welcome in churches and were forced to preach “open-air” sermons. Whitefield in particular preached the necessity of the conversion experience, an inner regeneration brought on by the Holy Spirit, which he referred to as the “new birth.” He embraced the doctrine of predestination, the belief that God had preordained certain individuals to eternal salvation, and others, in just punishment for their sins, to eternal damnation. Whitefield identified as Calvinist whereas the Wesley brothers identified as Arminians, leading to disagreements within the sect concerning the doctrine of predestination, Christian perfection and limited atonement. This stark theological divided the movement. Whitefield championed the Calvinistic Methodists. In 1742, he officiated at their first meeting as a denomination in England and in 1743 attended their first meeting in Wales.

Selina Hastings, the Countess of Huntingdon, an important figure in the early years of the Methodist movement, embraced the same Calvinistic orientation. Familiar with both the Wesleys and Whitefield, she leaned toward Whitefield’s doctrines and made him her personal chaplain in 1748. In 1761, she opened her own chapel at Brighton. Her network grew to include 64 chapels and in 1783, eight years before her death, the series of chapels were formally recognized as “The Huntingdon Connexion.” Those who attended sermons at the chapels were known as “Huntingdonian Methodists.”

As the Connexion expanded, Huntingdonians felt it necessary to choose between the Connexion and the Anglican Church. The Connexion was deemed a “dissenting body” that had its own articles of faith and differed in organization from the mainstream church. The Huntingdonian “Fifteen Articles of Faith” were a collation of the Westminster Confession of Faith and Shorter Catechism and the Thirty-Nine Articles of the Church of England and embodied a Calvinistic Methodist theology. The Connexion hosted enthusiastic daily prayers and revival meetings with ministers who followed the same fervent preaching style as Whitefield. They highlighted the role of God in daily life and the importance of following one’s inner light, a notion that stood in direct opposition to the traditional Anglican conception of salvation through religious ceremony.

The Countess of Huntingdon had a profound influence in the evangelical fold of the 18th century, with connections reaching beyond England and Wales, into America, Nova Scotia and New Brunswick. Her followers supported the Methodist teachings of individual communication with God, equality of men as sinners, and personal humility, which greatly appealed to Black Loyalists at the time. In 1785, the Countess recruited John Marrant, a Calvinist Methodist preacher and freeborn black, for a missionary project in Nova Scotia. In 1784, Marrant had received a letter from his brother, highlighting the need to spread Christian knowledge amongst the Black Loyalist community relocated to Nova Scotia. This letter piqued the interest of the Countess, resulting in Marrant’s ordination on May 15, 1785 at Vineyard’s Chapel, Bath, England. He arrived in Nova Scotia on November 20, 1785 and established a ministry with 40 families in Birchtown. His work extended beyond the black community in Birchtown, preaching to the Micmacs and to black settlements in the province. At the time that the Huntingdonians joined other Nova Scotia blacks in resettling to Sierra Leone, the Huntingdonian Chapel in Birchtown was under the direction of Cato Perkins and William Ash. Since virtually the whole community decided to emigrate, the congregation fell apart in January of 1792. The Huntingdonians were among the 1,200 Black Loyalists who left Halifax for Sierra Leone. The Huntingdonian community then established churches and schools in Sierra Leone.

Gustavus Vassa was greatly inspired by the fervour and earnestness of the Calvinist Methodist preachers, having first encountered Whitefield at one of his sermons in Savannah on February 10, 1765 (although Vassa mistakenly indicates the year as 1766 in his narrative). The notion of predestination was particularly compelling to black authors, such as Phyllis Wheatly, Morrant, Robert Wedderburn and others, who were restricted by racial hierarchies. Whitefield’s religious influence on Vassa was so profound that when Vassa died on March 31, 1797, he was buried at Whitefield’s Tabernacle, a Methodist chapel built in Whitefield’s honour in 1756 on Tottenham Court Road in London, now the site of the American International Church. The Countess of Huntingdon was also one of the many religious benefactors and philanthropic abolitionists to support his autobiography financially, presumably due to his advocating religious views consistent with her own. 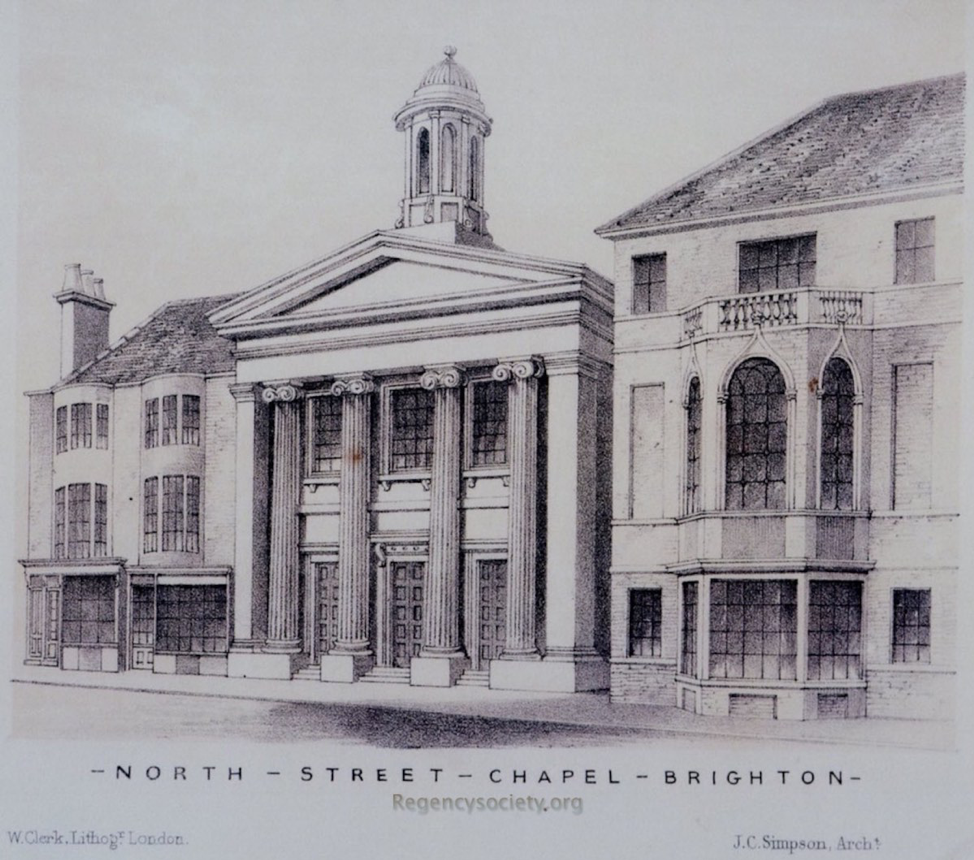 Wood engraving of The Countess of Huntingdon's first chapel at Brighton from J. G. Bishop's A Peep into the Past: Brighton in the Olden Time (1880).