Horatio Nelson was born on September 29, 1758 in Burnham Thorpe, England to Reverend Edmund Nelson and Catherine Suckling. Nelson was a prominent British naval commander in the Royal Navy and was instrumental in the victories of the Nile (1798) and Trafalgar (1805) battles against Napoleonic France. Nelson was born as the sixth of 11 children. During his early years, he studied at Paston Grammar School in North Walsham, later going to Norwich school before formally joining the Royal Navy in 1771.

When Nelson joined the navy, he was 12 years old and was assigned to service a ship commanded by his maternal uncle, HMS Reasonable. During this time, he took part in the operations against Spanish settlements in the Bay of Honduras. Central America became a prime target once Spain formally joined France in alliance with the American revolutionaries. Though the expedition proved to be successful, virtually the entire British force was wiped out by yellow fever and Nelson was lucky to have survived. At the age of 20, Nelson became a captain. He was first acquainted with Gustavus Vassa on a scientific expedition under the command of Constantine Phipps to the Arctic in 1773. The expedition included Dr. Charles Irving, a scientist renowned for his work on water purification to whom Vassa was contracted.

In 1777, Nelson passed the lieutenant examination and sailed for the West Indies, which was the most active assembly in the war against the American colonies. Following the cessation of the US revolutionary wars, Nelson found himself out of work due to the financial cutbacks in the navy. Nonetheless, he developed a reputation as a noble commander, who was bold and courageous. These qualities would prove to be especially beneficial in his later battles, particularly the Battle of Trafalgar for which he is most known.

During his time off, Nelson met and married Frances Nisbet, and in 1787 returned to England with her. Several years later in Naples, he fell in love with another woman, Lady Emma Hamilton, with whom he had a long and public affair. A child was born out of wedlock.

Nelson returned to active service following the start of the French revolutionary wars and was involved in key battles in the Mediterranean. He achieved a number of victories during this period, specifically the Battle of Copenhagen (1801). Though he was initially ordered to withdraw all naval vessels, Nelson ignored the command, and as such, gained a notable victory. Following this triumph, he was appointed vice-admiral in 1801.

From 1794 to 1805, the Royal Navy proved its supremacy over the French under Nelson’s leadership. His most famous victory at Cape Trafalgar saved Britain when it was under threat of invasion in 1805. Under his command, France was defeated, but Nelson was killed by a French sniper on October 20, 1805. Nelson was given a grand funeral in St. Paul’s Cathedral in London, and several monuments were erected in his honor. 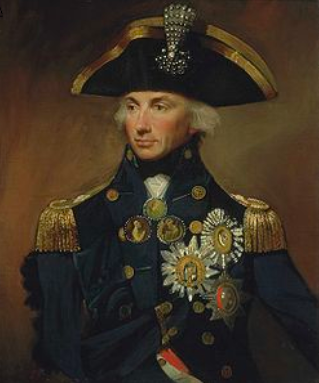